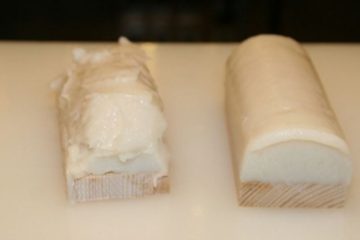 The smell of the Suzuhiro Kamaboko Museum in Odawara leaves no doubt that real fish, and lots of it, is being processed here. The smell is not overwhelming nor offensive, but there is a definite waft of seafood present everywhere in this small building with a warm and woody interior.

Suzuhiro has been making kamaboko, fish paste formed in small loaves onto wooden slabs and then steamed, in the Odawara area since 1865. In the generations to come, this family-owned company would expand its business all the way to Tokyo and to the rest of Japan. But its reputation remains as a local delicacy between the seaside Odawara city and Hakone, the nearby hot spring resort town.

The museum is part of a larger complex that consists of a spacious retail outlet and several restaurants. Inside the cozy museum, there is a glass-enclosed area where visitors can watch workers put together various products made from processed fish paste, an open kitchen for the kamaboko-making workshops, a gift shop, interactive displays and a gallery showing artwork using the wooden slabs from kamaboko as the canvas.

The highlight of the museum is without question the workshops. Participants are required to don a paper cap and apron before entering the preparation area. Everyone is given a place at a long wooden table with two scoops of fish paste and various tools to work with. The demonstrator gives instruction using a microphone headset while she deftly accomplishes each step. The participants typically struggle but with plenty of giggles, everyone eventually ends up with a decent-looking loaf on our little wooden slabs. While the loaves are being slowly steamed, we move onto our second task, making the chikuwa – roasted fish paste wrapped around a bamboo stick. With just one scoop of fish paste, we roll it onto a bamboo stick. Everyone does surprisingly well at this because by this time, participants have gotten used to handling the kamaboko knife. Our chikuwa skewers are then placed in a rotating roaster for 15 minutes.

There are various displays to entertain visitors while waiting for our fish pastes to cook such as an Edo-era, hand-operated pounding and grinding mortar as well as various wooden molds used to create ornate, decorative kamaboko used in celebrations. The interactive games are particularly popular with children. A game involves guessing what type of natural ingredients generates the color of the top layer of colored kamaboko. Tea leaves give a vivid green, dark seaweed produces a black hue and an citrus fruits turn the fish paste orange in color. The second floor is a gallery that overlooks the main floor and displays artwork done on the back of kamaboko wooden slabs. There are whimsical works by school children as well as clever images by professional artists.

Before long, the chikuwa is ready to eat. This is tasty stuff. The skin is slightly burned and crispy, and the fish paste hot and aromatic. Next door to the museum is Kamaboko no Sato, the large retail outlet selling an enormous range of fish paste products, local seafood and even beer made from microbreweries. Kamaboko is usually regarded as a cheap snack, but Suzuhiro products are of a higher quality. “It has a stronger fish taste,” someone commented upon sampling a piece of paste dipped in soy sauce. It has a more fish taste. Indeed, a higher percentage of fish is clearly used in Suzuhiro products than ones on sale at supermarkets. There are also specialty products here such as kamaboko where you create your own design to be engraved into the top pink layer of the loaf. If you get hungry for more than fish paste, across the road, there are several restaurants, including a buffet, a fine dining Japanese restaurant and a soba (buckwheat noodle) shop.

Odawara is home to one of Japan’s most famous historical castles. With its view over the Pacific Ocean, foreign visitors have called this one of the most “romantic” castles in the country. The castle museum has information in English. Combining the castle visit with kamaboko-making is a fun-filled day trip from Tokyo.

Kamaboko is a Japanese processed seafood paste made from the filets of white fish (various species), salt, Japanese wine, cornstarch and egg white pureed together. It is formed into a loaf onto a small wooden slab and then steamed. It preserves well natural tastes because it is steamed at a low temperature. It is eaten cold as an appetizer or snack and hot in soups. Chikuwa is the same pureed fish except the paste is wrapped around a bamboo stick and then broiled. It is characterized by having a brown skin and being hollow in the middle. Fish pastes are a tasty snack and a good source of protein,

Fish paste has been eaten as early as the Muromachi Period (1338–1573). Odawara’s kamaboko gained fame in the Edo Period (1603-1868). Being one of the 53 station cities along Japan’s main transportation corridor, the Tokaido road, many travellers enjoyed snacking on the kamaboko of this seaside city.

How to make kamaboko:

How to make chikuwa: 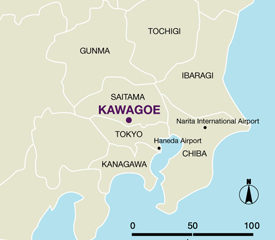 The city is just about 30-minute train ride from the center of Tokyo. Kawagoe is conveniently located in the southwestern Saitama Prefecture, which is part of the Greater Tokyo Area.

Some of its streets preserve the old castle town of the Edo period (1600 to 1867). Prominent sites include “Tokino Kane” (bell tower). The bell tower serves as the symbol for the city and rings three times a day even now. Other sites include the 500 Rakan statues at Kita-in, a prominent Buddhist temple believed to have been founded in 830.

The Kurazukuri Street is a section of a street lined with traditional warehouses constructed in a style called kurazukuri and maintains the old outlook of what the place was like more in Edo period. Within and beyond the Kurazukuri Street, many warehouses from the 18 and 19 centuries can still be seen.

Kurazukuri Street  You can try rickshaws.

MAKE THIS CLEARER and more FOCUS so that only SAITAMA, TOKYO and TWO airports are on the map. NO NEED TO TOCHIGI, GUNMA.

Use Tobu Tojo Line (From Ikebukuro to Kawagoe) and it takes about 30 minutes by express trains and costs 450 yen.

Use JR Kawagoe Line (Shinjuku to Kawagoe) and it takes about 60 minutes and costs 570 yen. 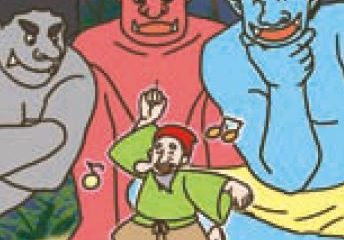 Japanese Fable: The Old Man with a Lump 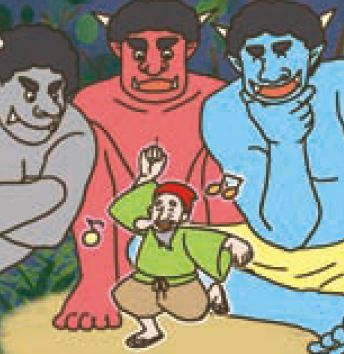 The Old Man with a Lump

A long, long time ago, in a certain place, there lived an old man with a big lump on his cheek. Whenever the old man was cutting firewood, the lump kept swinging and swinging. It was a lump that really got in the way. But the old man didn’t worry about it at all. He was a very relaxed old man.

In the same village there lived another old man with a lump on his cheek. Perhaps it was because the lump on his cheek got in the way and really bothered him, but this old particular man was always angry and in a bad mood.

One day, the relaxed old man was cutting wood deep in the forest when suddenly, out of the blue, it started to rain, drip, drip, drip. Soon, in the shake of a lamb’s tail, it was pouring down. “This is completely hopeless! If I stay out here, I’ll catch a cold.” So saying, the old man rushed under a big tree to take shelter from the rain there. After a while, the old man fell fast asleep.

Eventually it stopped raining, and the bright moon came out, but even so the old man stayed fast asleep, snoring loudly. In no time at all, it was midnight. And then, coming from who knows where, for who knows what reason, he began to hear lively festival-like music. “Huh? Where can that be coming from?” When the old man, who had completely woken up by now, headed in the direction of the music, he was completely floored. “Whaaaattt?!”

To his amazement, a group of monsters who lived deep in this forest, were in a circle singing and dancing! Dah dah dee dum, dah dah dee dum

There were red monsters, blue monsters, black monsters, big monsters, small monsters. All of them were drinking, singing, and having a great time.

The old man, who at first had been afraid, after a while forgot his fear and without thinking, joined in the dancing himself. “Oh, this is a really fun dance!”

Because the old man’s dancing was so good and he was enjoying himself so much, the monsters started dancing with the old man.

Finally the leader of the monsters stood up and held hands with the old man and danced with him. The relaxed old man and the cheerful monsters kept on dancing, completely forgetting about the time. Eventually, the sky in the east grew bright. Dawn had come already.

“Cock a doodle doo!” “Oh, the first cock of the dawn has crowed.” Once it becomes morning, the monsters have to return to their homes.

“Hey, old man, come and dance again tonight. I’ll keep this lump of yours till then. If you come tonight, you can have it back, OK?” And the leader of the monsters plucked the old man’s lump off his face. Instinctively, the old man stroked his cheek. “Oh, my lump has gone!” Without leaving any scar or causing any pain, the old man’s lump had cleanly disappeared!

After that, the old man returned to his village. Thrilled with what had happened to him the previous night, he told the other old man with a lump on his cheek all about it.

“What! The monsters took off your lump?!” This old man was really envious. “Right! If that’s the case, I’ll also get my lump taken away by the monsters.”

So, when evening came, the second old man with a lump set out for the depths of the forest. At last, he began to hear the sound of the festival music.

“If I go to where the sound’s coming from, they’ll take away my lump!” So the old man walked towards the place where the monsters had gathered in a circle and were dancing. But the moment he saw the monsters’ scary faces, his legs began to tremble and he couldn’t walk any further.

But unless he went to where the monsters, he wouldn’t be able to have them take away his lump. So the old man at last gathered his courage and threw himself in front of the monsters.

“Hey, we’ve been waiting for you!”

“Please do a funny dance again for us tonight!”

The monsters were very happy.

But there was no way that the old man, who was so frightened of the monsters that he couldn’t stop trembling, could be expected to do any kind of funny dance.

“Hey, what’s that terrible dancing?” Because the old man’s dancing skills were so poor, the leader of the monsters gradually fell into a bad mood. Then he became angry and yelled, “You fool, you’re a hopeless dancer! I’ll give you back what you left behind last night. But never come back here again!”

And that’s how the other old man ended up getting a second lump on his cheek.

Illegally parked bicycles outside of rail stations can be a real nuisance, creating eyesores and blocking pedestrian traffic. Even after pay parking for two-wheelers is provided, people still leave their bicycles along the street. To deal with this problem, one station in Osaka came up with the idea of encouraging school children to draw pictures pleading for cooperation, which were affixed to the street. In spots with these pictures, fewer people parked their bicycles atop the pictures, but instead moved just a short distance away. It was like a cat-and-mouse game.