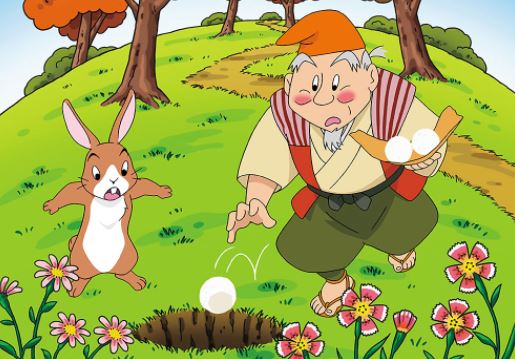 Once upon a time, long ago, an old woodcutter sat himself down on an old tree stump at lunchtime.

“The rice balls my wife makes are truly delicious,” he said to himself as he opened the bamboo-bark wrapping.

One of the rice balls tumbled to the ground, rolling over and over and falling into a hole nearby.

The old man peered into the hole. From the depths he could hear this song:

“How strange,” thought the old man. “Who can be singing?”

He had never heard such beautiful singing before.

The old man dropped another rice ball into the hole.

As soon as he did so, the song returned.

The old man quite happily put all the rice balls into the hole and didn’t eat even one himself.

The next day, the old man had his wife make even more rice balls than the day before. Then he climbed up to the mountains.

He waited for lunchtime, then – roly-poly, roly-poly – he dropped the rice balls into the hole.

This time he heard the same pretty song he had heard the day before, coming from the hole.

“Oh dear, oh dear! I’ve lost the rice balls. But I want to hear more…I know! I’ll go into the hole and try asking to hear it again.”

Rolling like the roly-poly rice balls, the old man went into the hole.

Down there he found a great number of mice – too many even to count.

“Welcome, old man. Thank you for all the delicious rice balls,” said the mice, lowering their little heads and bowing in gratitude to him.

“And now, to show appreciation, we will make rice cakes for you.”

The mice brought out a mortar and pestle, and singing,

they began to make rice cakes.

“These rice cakes are delicious. There is nothing better than your rice cakes and your song!”

After the old man had feasted on the rice cakes, he went home, carrying as a souvenir a little magic mallet that, it was said, would give him anything he wanted.

“Oh my wife, what is it that you want?” asked the old man.

“Well, there are many things I’d like to have, but how good it would be to have a lovely baby,” answered the old woman.

The old man only had to swing the little mallet, and there was a baby on her knee.

Of course, it was a proper human baby.

And the old man and the old woman lived happily ever after, raising the baby together.