Hidden yet beautiful gardens in Tokyo

The main pond of the garden 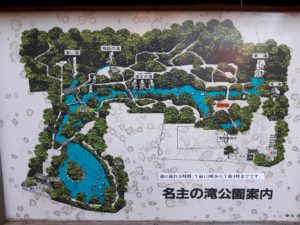 Map of the garden 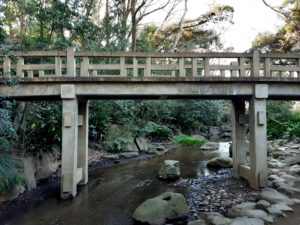 One of the several bridges

The stream in the garden

It was opened in the middle of the 19th century as a private residence by the lord of , “Magohachi Hatano,” and the origin of the name “lord’s waterfall” came from here. It was not until the middle of the Meiji era (1868-1912) when a man named Kakiuchi Tokusaburo owned the property that it was developed into a garden. In 1938, Seiryoken Co., Ltd. purchased the garden and built a cafeteria and swimming pool, but it was destroyed by fire in April 1945 in an air raid, and it wasn’t until November 1960 that the Tokyo Metropolitan Government reopened it to the public.

The Oji area, at the tip of the Musashino Plateau, is home to many waterfalls, and there used to be seven waterfalls known as the “Oji Nanadaki”. Of these, Nanushi-no-Taki is the only one that still exists. The falls consist of four waterfalls.

The park is a strolling garden where these waterfalls, zelkova trees, enoki trees, chinquapin trees and more than 100 yama-momiji (Japanese maple tree) trees are planted on a slope to create a natural landscape.

It is located in Kita ward, near Oji station on JR Keihin Tohoku line.