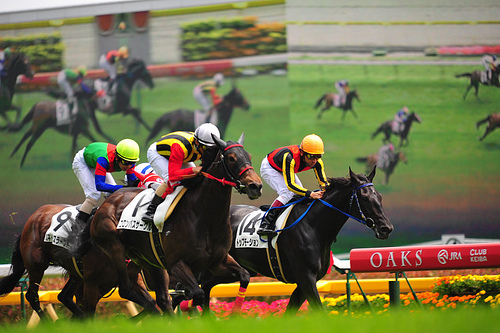 Certain professional sports in Japan, such as horse racing, bicycle racing, motorboat racing, and auto racing, are operated by public organizations for the benefit of the public. Currently some 100 such facilities exist around the country, of which 26 are horse tracks, 44 are bicycle tracks, 24 are man-made lakes for motorboat racing and six tracks for auto racing. In 1992, the income from bets placed at such facilities reached a peak of 8.932 trillion yen ($111.6 billion), but by 2010 the figure had declined to half that amount. The main reason for the decline was the economic recession. But even if spectators chose not to bet, they can enter to watch races for as little as 100 or 200 yen in admission fees — making it an affordable form of leisure. While minors are permitted entry when accompanied by a parent or guardian, a person must be at least 20 in order to engage in betting.