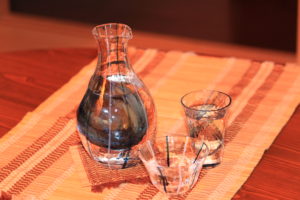 January, the coldest month of the year in Japan, has traditionally been the time when fresh brews of sake are finished. Sake, which has gained great popularity even outside Japan in recent years, is made from rice which is harvested in autumn, brewed, fermented, and completed just in time to greet the New Year. For sake brewing, water is very important, which along with rice composes 80% of the final product, so areas blessed with superior quality groundwater such as Fushimi, Kyoto Prefecture and Nada, Hyogo Prefecture produce around 50% of Japan’s sake.

Sake has a very deep time-honored connection to the Shinto religion in Japan. In Shinto wedding ceremonies, the wedding vows are enacted by the couple drinking sake together, and in Shinto festivals this sacred alcohol of sake is offered to worshipers. In this way, sake has become indispensable in the daily life and at turning points of one’s life since ancient times.

Sake can be enjoyed both chilled and hot, which is relatively rare for alcohol. Enjoying a warmed cup of fresh sake during the cold winter is something to look forward to. Sake also perfectly complements the subtle flavors of Japanese cuisine as one would expect, but since it draws out the flavor of food so well, the number of restaurants in cities such as New York and Paris which offer Japanese sake has been increasing. In 2006 a sake division was established in England’s traditional International Wine and Spirit Competition, and its degree of recognition is increasing little by little. Particularly a type of sake called “daiginjoshu” which has a flavor similar to white wine is gaining popularity.

The storehouses used to preserve sake brews are called “sakagura.” When visiting a sake brewing town in Japan one can witness the scene of these storehouses lined up along the streets. Various sake brewers are assembled in Nada ward and the flavors vary depending on the maker. You can enjoy walking from brewer to brewer searching for your favorite sake.

For strolling around Fushimi, located in Kyoto Prefecture, we recommend the “Sunrise Tour” in English aimed at foreigners, called “Fushimi Inari Shrine and Sake Tasting Tour.” It includes tours of sake brewing facilities, sake tasting, and a tour of the famous Fushimi Inari Shrine.

Ｔour starts from the stroll through the sake brewery streets, then to the Gekkeikan Sake Museum. There, visitors can view tools used in sake brewing and related historical objects, sample water used in sake production, and take an exclusive tour of the sake brewing facility itself. Here, you can participate in sake tasting, so why don’t you try finding your favorite sake?

Ｎｅｘｔ, visit Fushimi Inari Shrine famous for its path lined with thousands of red torii gates. Shinto shrines’ gods are known for granting wishes, and it is said that the Fushimi Inari shrine answers requests of prosperous sales in particular.