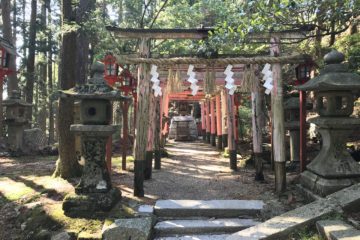 What is Shinto and Shitoism?

People from abroad often ask me, “What is Japan’s original religion?” I answer Shinto, which means the “way of the gods.” From ancient times, the Japanese have lived worshipping multiple gods. The sacred buildings where these gods dwell are called jinja or shrines.

At the entrance of the shrine is a torii or archway. The torii is the gateway to the shrine as well as a symbol that clearly separates the outside and the inside of the shrine. Outside the torii is the place where human beings dwell (general secular world) and inside the torii is the sacred place where the gods dwell. Buddhism reached Japan in the 5th century, after traveling from India through China and Korea. The Japanese at that time built temples to worship the Buddha as a god. You can see the sculptures of the Buddha at the temples, but at shrines there are no such physical forms of gods. From long ago, the Japanese had worshipped unseen gods imagining them existing as powerful forces. Presently, there are about 80,000 shrines throughout Japan. I’ll introduce a brief history and types of these shrines here. To the ancient Japanese, growing rice was an important aspect of their lives. From planting of the rice shoots to harvesting, the people were grateful for the abundance of sunshine and rain, worshipped them as gods, and prayed to them. This is why Japanese Shinto is said to be a religion that worships nature. Shinto has worshipped mountains, rivers, ocean, trees, sky and even the universe itself as gods, and prayed to them. These practices became Japanese events which still continue to be held as festivals. Even today, at the Imperial Palace, the Emperor prays for an abundant harvest for the year (Kinensai or prayer festival held every February) and celebrates the year’s harvest (Niinamesai or harvest festival held every November). These events have continued to this day as important ceremonies entrusted only to the Emperor by his ancestor Amaterasu-omikami (the Sun Goddess). These are both annual events as well as ceremonies for gods. On the same days as these ceremonies at the Imperial Palace, festivals are held at shrines throughout Japan to pray for an abundant harvest of rice and other crops for the year or to celebrate the year’s harvest. It is said that Shinto began around 2600 BC during the period when rice cultivation started and people prayed for the blessings of heaven, earth and nature. When tracing the history of shrines, there were no such shrine buildings as those we see today in ancient times. Shrines started when Shinto priests or priestesses began calling gods onto large sakaki trees (large evergreen trees like laurels), natural stones or rocks.

The Omiwa Jinja in Nara Prefecture believed that a god was dwelling on Mt. Miwa and thus worshiped the mountain as goshintai or an object that contains the spirit of the god. Of the gods of Japan, Amaterasuomikami is at the highest position. That is, Amaterasu-omikami, the goddess of the sun, tops all other gods in Shinto. The Japanese Emperor is said to be a far-distant but direct descendent of Amaterasu-omikami. Japan’s oldest chronicle the Kojiki (Record of Ancient Matters) records the history of shrines. Ordering a search for a holy site to enshrine the mirror that represented Amaterasuomikami, the 10th Emperor Sujin entrusted the mirror to his daughter Toyosukiiribime-no-mikoto. Later, the 11th Emperor Suinin’s daughter Yamatohime-nomikoto carried on the order and continued the search, finally reaching the holy site of present day Ise, Mie Prefecture.