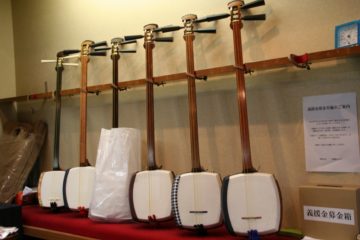 What is Shamisen? How to Make It?

The shamisen is a plucked instrument with three strings, similar to a guitar or a banjo with a neck and strings stretched across a resonating body. It is said that the shamisen was developed in the mainland of Japan in the 16th century based on the Okinawan sanshin. Though the shamisen was adapted from the sanshin, their roles in contemporary society greatly vary. In Okinawan culture, their minyo (folk music) is a part of everyday life. Therefore, it is common to find many young people who can play the sanshin on a casual level. It is a simple instrument made of wood with a snakeskin or artificial body. The shamisen, however, has two faces. One is that of a refined instrument used in Japanese classical performances like kabuki (Japanese traditional theater) and bunraku (Japanese traditional puppet theatre). Secondly, the craftsmanship is exquisite, using red sander wood imported from India. However in rural regions, it is still played casually when singing local folk songs, similar to the sanshin.

The shamisen can be played solo, with other instruments or accompany singing. In recent years, a new style of playing based on the traditional folk songs of the northern Aomori region, but with improvisation and fast-paced fingerwork, known as “tsugaru jamisen” has grown in popularity. This style is sometimes compared to the American bluegrass banjo. The music of a duo called the Yoshida Brothers has gained worldwide recognition as their “rock shamisen” songs are used in popular video games.

Shamisen Katoh: Plucking at the Heartstrings of Japan

The one thing that distinguishes Kaneharu Katoh from other masters of traditional crafts is his gift of gab. Because an artisan works long hours for years mostly in solitude, developing conversation skills is not a natural process. Yet watching Katoh emcee his annual Chitoshan-tei, a small live show in Tokyo’s downtown district of Machiya, it is easy to see how he is Japan’s premier promoter of shamisen culture.

At the age of 15, Kaneharu Katoh went to learn to make shamisen from a master. Twenty three years ago, Katoh began his own shop and began the Chitoshan-tei tradition. Opening the windows of his shop, pedestrians can stop to watch the show that consists of shamisen collaborating with various instruments. Indeed, it has been Katoh’s life work to broaden the fan base for shamisen music.

An important turning point in his career – and in the history of the shamisen – was when Kunimoto Takeharu, a shamisen player who also did many types of experimental performances, approached him about the possibility of creating an electric shamisen. Kunimoto wrote music and performed in ensembles with western instruments. In such groups, the sound of the shamisen would always be drowned out. Along with his employee Masaaki Yamaguchi, Katoh created the Mugen 21, a shamisen with a built-in microphone, which opened a new range of possibilities for the instrument.

“Music keeps evolving and so changes in how an instrument is played will also be natural. For the shamisen to thrive, it must adapt to new trends and let itself be influenced by many factors,” says Katoh about the reasons why he took on the Mugen 21 project.

Since the Edo period (1600-1867), there had been few changes in the shamisen form. From the Meiji period (1868-1912), with the introduction of western instruments like the piano and guitar, traditional Japanese instruments had been on a long decline. Katoh was committed to expanding the realm of shamisen players beyond professionals and the few devoted hobbyists. Within the last 10 years, there had been a trend to use the electric shamisen in rock music. The music of electric shamisen played by Nagatsuma Hiromitsu and the Yoshida Brothers found their way into the most popular video games and young children from across Japan and around the world would became fascinated with this sound.

This year, Katoh’s shamisen world as represented by Chitoshan-tei, took a difference stance on increasing the exposure of the instrument. The highlight of the event was a performance by young artist Misao Habu, using a shamisen made by Katoh from the debris of the Great East Japan Earthquake. Last June, Katoh was asked by a volunteer group “Zero-One Project” to make a shamisen from the massive debris of the earthquake. Since the neck of the shamisen can only be made from very hard wood not grown domestically, Katoh was not optimistic about finding appropriate material. But from the rubble of Miyajima in Miyagi Prefecture, he found a suitable type of African wood and proceeded to make three shamisen. Many in the audience came to the event after reading about the recycled shamisen in the newspaper. Armed with little knowledge and only curiosity about the recycled instrument, people came and were captivated by Habu’s energetic tsugaru style performance. Katoh looked pleased as he looks onto the nodding heads and clapping hands of the new converts to the instrument he has committed his life towards promoting.

Visitors are welcomed to watch the process of how shamisen skins are placed on the instrument. Then they can learn how to play a simple song on the shamisen. Katoh puts together about eight shamisen a day. However, in the busy fall season, visits will be limited.

The traditional craft of making a shamisen is divided into two parts. The first is creating the neck and the body of the instrument from red sander wood. The neck typically consists of three parts that interlocks into each other. Because the wood stains everything a reddish brown, including the hands of the artisan, a different person must be responsible for the placement of the skin. Katoh specializes in the skin.

The process of placing the skin over the body of the shamisen:

1)      The kind of skin used is determined by the level and personal preference of the user. 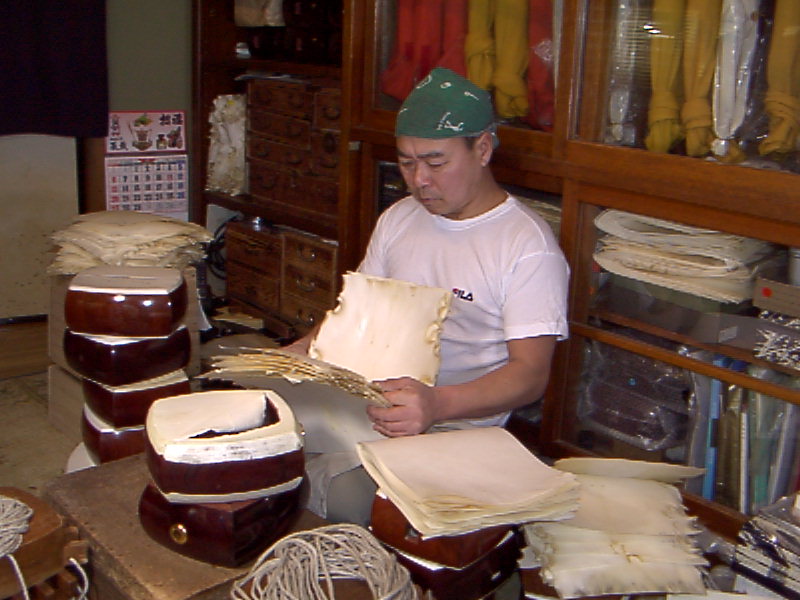 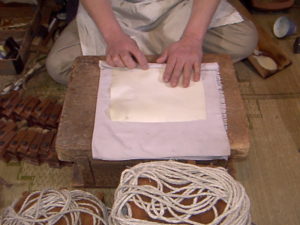 2) The skin is wet thoroughly.

3) The skin is rubbed with a piece of sandpaper to make it smooth, even and resistant to cracks. 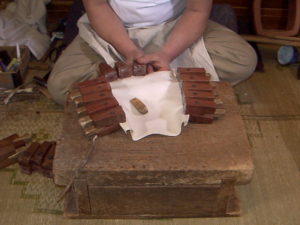 4) The skin is then stretched using wooden pins called “kisen” that also serves as weights to make the skin taut. 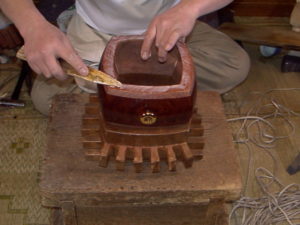 5) Next is the preparation of the special glue which is made from sticky rice powder. The glue is placed on the body using a “hira,” a small bamboo spatula. 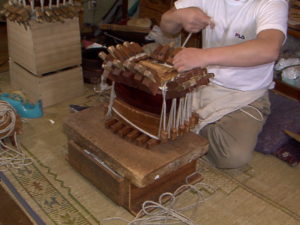 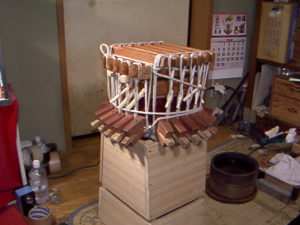 7) The shamisen is placed over a heater to dry. After an hour, it is then air-dried at room temperature. 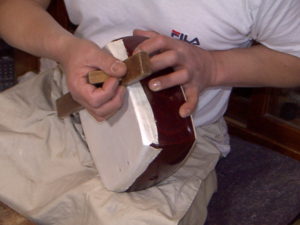 8) The ropes are then taken off. The entire skin is smoothed over with the hira.