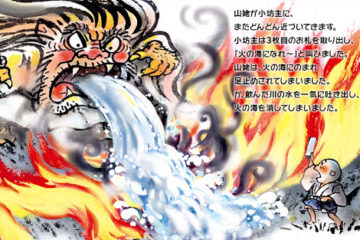 An apprentice priest lived in a certain temple. One day he was told by the chief priest to go over the mountains to the neighboring village on an errand.

“In the mountains, there is an old hag, onibaba, who eats people. Take these three ofuda paper talismans with you. If you say out loud what you wish for, it will definitely come true.”

After the errand in the neighboring village, the young priest walked back along the mountain path. After a while, he came across an old woman sitting by the side of the road.

“Young priest, young priest, can’t you lend me a hand? My legs hurt and I can’t walk and so I can’t get home,” said the old woman.

The young priest got hold of the old woman’s hand and pulled her up.

“It’s over there.” So saying, the old woman showed the young priest the way.

But the path kept taking them further and further into mountain country. Then, at last, they came to a ramshackle old hovel deep in the mountains.

“Thank you. But it will soon be dark. The road is dangerous at night, so you should stay here overnight.” Since the old woman told him to do so, the apprentice priest had no choice but to spend the night at the old woman’s place.

In the middle of the night, the apprentice priest suddenly woke up. He could hear a scraping sound, scrape, scrape. When he peeped into the next room through a hole in the fusuma sliding door, he could see that the kind old woman, who had seemed so nice, had turned into an old hag, and what was she doing? Sharpening a knife!

“Oh no, I bet she’s going to eat me!” thought the apprentice priest. “I know. I’ll say I have to go to the toilet, and then run out of here.”

“Lady, lady, I need to pee.” The apprentice priest called out to the old woman.

Once the apprentice priest had got inside the toilet, he untied the rope fastened round his waist and tied it instead around the main pillar. Then he stuck one of the paper talismans the priest had given him onto the pillar.

“Please, if that onibaba hag says anything, reply with “Not yet, not yet!” he begged the paper. Then the apprentice priest quietly climbed out of the window and ran away.

Whenever the old hag said something, the reply came back, “Not yet, not yet!”

“Haven’t you finished yet, young apprentice?” “Not yet, not yet!”

So things passed for a while. And the apprentice got further and further away.

“Stop fooling around! How long are you going to be in there?” But when the old hag forced the door of the toilet open, nobody was there.

“That terrible apprentice!” The onibaba hag chased after the apprentice in a great fury.

She was so fast, so fast, that before you knew it she was closing in on the young apprentice. When she’d got so close that she could almost reach out and touch him, the apprentice priest threw down the secondtalisman, saying, “Please make a big river.”

And then, right before the old hag’s eyes, a big river appeared. The old hag would have to cross it.

While this was going on, the apprentice priest ran further and further away.

Instead of swimming across the river, the old hag drank the river completely dry, and chased the apprentice priest with even more speed than before. In just a little more time, her hand would be able to reach his back! But just then, the apprentice priest threw down the last talisman and said, “Please make a big fire!”

Suddenly a big fire appeared, and the old hag couldn’t go any further, unable to catch up with the young apprentice. But she spewed out the river water she had drunk and put out the fire completely.

In the meantime, the young apprentice had used this chance and managed to run as far as the temple where the priest was. He told the priest, “Priest, priest, it’s terrible! I’ll get eaten by the old hag!”

“It’s all right, don’t worry, just hide in that closet,” said the priest.

As soon as the young apprentice had hidden in the closet, the old hag rushed onto the scene.

“Liar! If you tell lies, you’ll get eaten yourself!”

Hearing this, the old hag said, “What’s the big deal? It’s just a bean. Nothing to it!”

Saying this, she turned a somersault. And then, quick as a flash, she changed herself into a tiny little bean.

Seeing this, the priest quickly put out his hand, grabbed the bean, and threw it into his mouth. Then he ate it up, munch, munch, crunch and crunch.