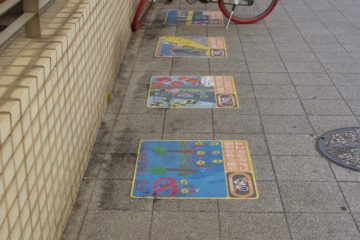 Illegally parked bicycles outside of rail stations can be a real nuisance, creating eyesores and blocking pedestrian traffic. Even after pay parking for two-wheelers is provided, people still leave their bicycles along the street. To deal with this problem, one station in Osaka came up with the idea of encouraging school children to draw pictures pleading for cooperation, which were affixed to the street. In spots with these pictures, fewer people parked their bicycles atop the pictures, but instead moved just a short distance away. It was like a cat-and-mouse game.