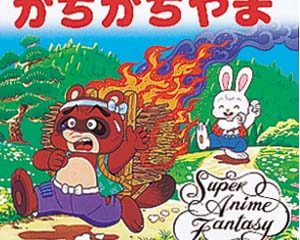 A long, long time ago, in the mountain behind an old man’s house, there lived a badger.

After a while, the old man began to lose patience with the badger and his tricks, and so he set a trap in his field and caught the badger. Then he hung the badger from the ceiling and said to his wife, “Wife, this badger has a nasty character, so you absolutely must not release him from this trap.” So saying, the old man went to work in his fields.

When the old man had gone, the badger said to the nice old woman, “Old lady, I am sorry for what I have done. I won’t do bad things any more. To atone for my sins, I’d be glad to massage your shoulders.”

The old woman, believing what the badger said, released him from the trap.

“Ha, ha, you stupid old hag, believing what a badger says!” Saying this, the badger ran away to escape into the mountain behind the house.

Then a kind rabbit came along. “Old lady, what’s the matter?”

“The badger’s gone and run away!”

“Oh, that badger with the nasty character, right? I’ll punish him for you!”

The rabbit thought of ways to get back at the badger, and first decided to ask him to go and cut some grass. “Badger, how about going to the mountain to cut some grass?”

Then, on the way back from cutting the grass, the rabbit used a stone as a flint to light the grass that the badger was carrying on his back, “Click, clack!”

“Huh? Rabbit, what was that click, clack sound just now?”

“Oh, this mountain is known as Mount Click Clack, so it sometimes makes a click clack sound.”

After a while, the grass the badger was carrying on his back started to burn fiercely.

The badger got a big burn on his back.

The next day, the rabbit went along to see the badger, taking some medicine he had made out of chilies.

“Badger, I’ve brought some medicine for your burns.”

“That’s kind of you. That Mount Click Clack is a horrible mountain. I can’t stand the pain on my back, it’s really hurting. Please hurry up and put on the ointment.”

The rabbit rubbed the ointment made of chilies on the burn on the badger’s back.

“Ow, that hurts, it hurts! This ointment’s really painful!”

“Just put up with it. Medicines that work well usually hurt,” said the rabbit, and rubbed in even more ointment.”

“Aaarrrggghhhh!!!” It was so painful that the badger passed out.

The badger’s back healed after a few days had passed, and so the rabbit invited him to go fishing.

“Badger, I’ve built some boats, so let’s go to the sea to do some fishing.”

When they got to the sea, there were two boats.

Badger, you’re colored brown, so you can have this brown boat.”

So saying, the rabbit himself got on a boat made of wood, while the boat the badger got on was made of mud.

The two boats went further and further out to sea.

“Badger, how are you doing? Is that boat nice to ride on?”

“Yes, it’s nice. Rabbit, thank you for making a boat for me…. Uh-oh, it seems as if water might be seeping in…”

The boat made of mud was gradually melting into the sea.

Eventually the entire boat the badger was riding on sunk under the waves, and the badger almost drowned. The rabbit told the badger, “It was a punishment from what you did with the old couples.” So the poor badger had to swim back to the shore.