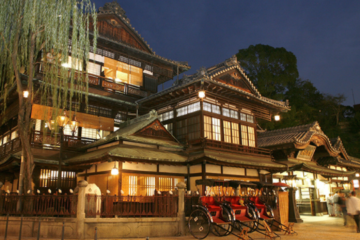 The Edo-Tokyo Open Air Architectural Museum, located in a western suburb of Tokyo, is a sprawling outdoor facility displaying buildings representative of the historical periods beginning from the Edo era in 1603 to the 19th century (Meiji Era), and 20th century (Taisho and Showa eras). Visitors are able to enter and view the buildings’ interiors, and obtain impressions about what life was like for the people who lived during those times.

This farmhouse was built in the late Edo era. Upon entering the doorway, the dirt flooring continues as-is for part of the room. The irori (open hearth) inside is where people sat to take meals, and as there was no ceiling but rather just the eaves of the roof, the rooms were rather dim even during the daytime. As people disdained luxuries in the Edo era, decorative alcoves and tiled roofs were severely regulated. The restrictions on social class were such that the homes of bushi (members of the ruling warrior class) were permitted have steps in their entranceways and decorative alcoves. These were also permitted in the homes of wealthy farmers.

From the Meiji era homes began to shed their feudal limitations, and were built to reflect the affluence of their owner. This house, built in 1906, was the central section of the residence of Korekiyo Takahashi, a leading political figure from the Meiji era until his death in 1936, known for his flair in economics. The house boasts an intricate structure using hemlock spruce, and sliding glass doors — which were still expensive at the time — to separate the wooden passageways from the garden.

The Meiji era, which preceded Taisho, was one in which Japan was greatly influenced by the West, including people’s homes. But initially Westernization was limited mainly to politicians and business magnates, and others in the upper economic classes. But with the Taisho era, more middle-class urban residents began adopting Westernized living styles, leading to the construction of dwellings combining Japanese and Western styles, which sprang up in suburban areas. While many featured tables and chairs, people still removed their shoes upon entry, and most preferred to maintain the practice of relaxing on tatami (rush mat) flooring.

This house, which adopts a semi-Westernized design, was built in 1925 as a private residence. The exterior is characterized by its steep hipped roof with tile roofing and eaves that jut out horizontally. The house was lived in and well cared for by its owner until 1996.

Bombing raids on cities during the Second World War resulted in the destruction of much urban housing and in the years immediately following the war, many low-quality, barrack-like homes were constructed. For practical reasons, kitchen and dining areas were combined, along with other innovations. In the prewar years, homes — whether farm houses or town houses — in many cases tended to be used for both working and living, but with the growth in salaried office workers after the war, it became more common for people to live apart from their work. You can see still many of them remain in Tokyo. So we take up a unique building here. This photo studio was built in 1937. Both the ceiling and wall of the northern façade on its second floor were made entire of glass, which was angled so as to ensure a consistent amount of light for photography. Such a design may be said typical of photo studios that were built in the days of primitive lighting equipment.