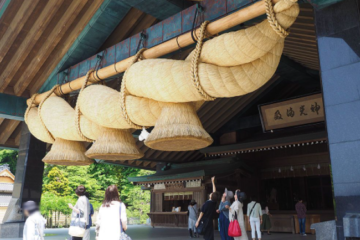 Shimenawa are sacred cords made of twisted strands of rice straw. They are believed to have the special power to ward off evil spirits or sickness. They are hung from torii (the entrance gates of shrines) or before the altars of Shinto shrines, and also around trees or rocks considered to be places of the divine. It is also common to find shimenawa over doorways of houses or on the front of cars at New Years.

Originally, it comes from the Chinese custom of placing wet twisted ropes around the dead after burying them in the ground for the purpose of cleansing the souls of the dead.