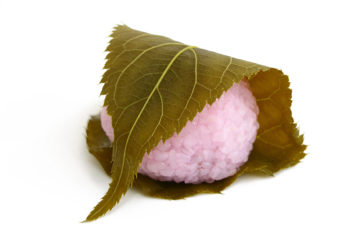 What is “Sakuramochi”? Where Was the First Cherry Leaf Used to Wrap Sakura Mochi From?

Speaking of sakura mochi (rice cake stuffed with sweet bean paste and wrapped in cherry leaves), its particular aroma created by the salted cherry leaves stimulates one’s appetite.  But who was it that first preserved cherry leaves in salt and used them to wrap mochi?

It was Shinroku Yamamoto, the gatekeeper of Chomeiji Temple in Tokyo.  The front gate of Chomeiji Temple opened up onto the bank of the Sumida River.  The area was commonly called Sumizutsumi.  And, since Sumizutsumi was well known for its cherry trees, spring was always crowded with people viewing the cherry blossoms.  When the blossoms were finished, the leaves would become luxuriant and would presently begin to fall.  The gatekeeper Shinroku would diligently sweep up the fallen cherry leaves keeping the temple grounds neat and tidy.  However, the leaves would keep falling one after another.  Shinroku was stumped because he always had to keep sweeping.

Up to his knees in leaves and thinking to himself that it would be a waste to simply throw away the many leaves, Shinroku hit upon the idea of pickling and preserving the cherry leaves.  Thinking further, Shinroku was struck with the idea that the preserved cheery leaves could be used to wrap mochi whereby the indescribable aroma of the cherry leaves would be transferred to the mochi creating a refined, elegant flavor.  It is said that this idea was the origin of sakura mochi.

In 1717, Shinroku began selling his thought up sakura mochi at the front gate of Chomeiji Temple.  As might be expected of a site busy with cherry blossom viewers, the sakura mochi instantly became popular, and even became a specialty of Sumizutsumi.  As an example of how popular sakura mochi was, “Toen Shosetsu,” a book of anecdotes published in 1825, relates that in the previous year 387,500 sakura mochi were sold and that the number of cherry leaves prepared for the mochi reached 775,000.

The sakura mochi first begun by Shinroku is still being sold at the front of Sumizutsumi as “Yamamotoya no Sakura Mochi.”