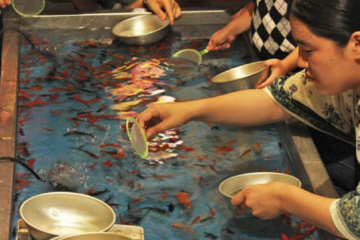 Goldfish scooping called “Kingyo-sukui” in Japanese is a traditional Japanese game in which a player scoops goldfish with a special scooper. “Kingyo” means goldfish and “sukui” means scooping. Japanese traditional festivals held at a shrine commonly have a stall for this activity. Both children and adults enjoy the game. The basic rule is that the player scoops goldfish from a small pool with a paper scooper called a “poi” and puts them into a bowl with the poi. This game requires care and speed
as the poi can tear easily. The game is over when the poi is completely broken or incapable of scooping properly. Even if one part of the poi is torn, the player can continue the game with the remaining part.
You can bring back home goldfish you could successfully scoop up. There is a nationwide tournament every year in Nara Prefecture and the person
who won the tournament in 2011 scooped up as many as 87 goldfish.