Japanese Fable: Why Does the Jellyfish Have No Bones? 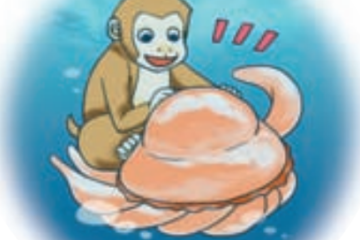 Japanese Fable: Why Does the Jellyfish Have No Bones?

The turtle went to a certain seashore. There, under a tree on the beach, she saw a monkey. “Monkey, monkey, won’t you come with me to the Imperial Dragon Palace under the sea? I’ll treat you to lots of delicious food there!”

“Really? You’ll treat me to some delicious food? In that case, let’s go!” Saying this, the money climbed onto the turtle’s back. With the monkey on her back, the turtle headed deeper and deeper into the sea.

Finally, they reached the Imperial Dragon Palace. Leaving the monkey waiting outside the palace gate, the turtle went off to inform the king that the monkey had arrived.

The jellyfish, who was serving as the palace gatekeeper, asked the monkey, “Monkey, what in all creation made you come to the Imperial Dragon Palace?

“The turtle told me that if I came to the Imperial Dragon Palace, she’d treat me to lots of delicious food,” said the monkey, feeling pleased with himself.

But the jellyfish burst out laughing. “Ha, ha, ha! That’s a lie. Monkey, you’ve been tricked. The real reason is that they want to give your liver to Princess Okisaki to eat.”

Just then the turtle reappeared on the scene. “Well, monkey, come along inside. The king says he will treat you to some delicious food.”

But the monkey said, “Hm,it seems there’s a problem here. I just heard from the jellyfish that you really want to feed my liver to Princess Okisaki, don’t you? You should have told me sooner. Actually, today I hung my liver out on the branch of a tree to dry.”

“What? You say you left your liver behind? If that’s so, it can’t be helped. Then please climb on my back again and let’s go back to get your liver.”

So saying, the turtle had the monkey climb on her back again and they headed back up to the sea’s surface.

But this time, as soon as they reached the shore, the monkey immediately escaped into the branches of a tree.

“Hey, turtle, you’ve been tricked! There’s no way I’d be drying out my liver now, is there? I just can’t imagine having my liver eaten, so I tricked you.”

The turtle had no choice but to go back to the Imperial Dragon Palace. When he got back there, he told the king that he had been tricked by the monkey. The king was really angry. “You stupid jellyfish, for talking too much! As punishment, I’ll have all your bones taken out!”

And that’s how it happened that the jellyfish had all his bones taken out and became a being with a wibbly-wobbly body.