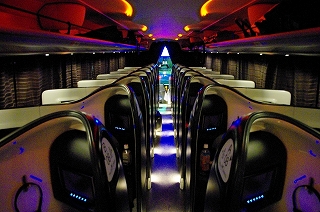 To many, overnight intercity buses have such negative images as “tiring,” “cramped” and “lacking in privacy.” While they are popular with students due to their lower prices, most adults prefer to travel via Shinkansen trains or by air. Bus fare between Tokyo and Osaka, around 4,000 yen, is less than one-third that of a one-way ticket aboard the Shinkansen. To attract more business travelers and females, in recent years buses have adopted more deluxe designs and comfortable seating. The four seats per row have been reduced to three, and for added privacy curtains have been provided. The seats can be reclined to as much as 145 degrees. In the newest type, seats feature enclosures like a cocoon, in a two row configuration, with each seat equipped with its own TV monitor (see photo). Also equipped with wireless LAN Internet connections, a one-way trip between Tokyo and Osaka costs 9,800 yen, still cheaper than the Shinkansen. This bus was also named recipient of a Good Design Award in 2010.