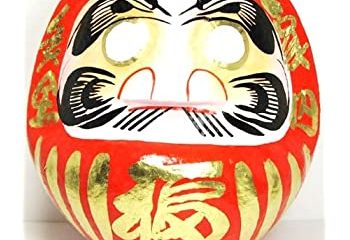 A daruma is a papier-mâché doll which is painted red except for the face and weighted at the bottom. It represents the Buddhist priest Bodhidharma, who lived in sixth century China, sitting in a lotus position. The doll is considered to bring good luck, because it always comes back to an upright position after being tipped over. Some daruma have no eyes. People paint one eye in right away, wishing for something to come true; the other is supposed to be painted when the wish is realized. The origins of the red color of the daruma can be traced back to the red robe that was supposedly worn by Bodidharma. But it was also believed that the color red has the effect of keeping evil away. Incidentally, in recent years, as well as the traditional red models, daruma dolls colored yellow, white, green, gold, etc. can also be found for sale.