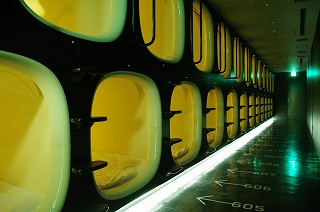 One night’s accommodation in a hotel in central Tokyo can easily cost between 10,000 to 20,000 yen. This might be affordable for a tourist, but for a person on a business trip who just needs a place to go after work to shower and sleep, 20,000 yen is far too expensive. This led to the creation of affordable “capsule hotels” in Japan. As they provided sleeping space for around 3,000 yen they were used mostly by salaried workers who were working overtime and missed their last train home, but initially had a reputation of being unsanitary, dangerous (because pilferage occurred), and inconvenient in terms of location. To address these problems, last year a new type of establishment named “9h” began operations, offering “a place to wash off the grime,” “restful sleep” and “prepare the body for the next day.” The aforementioned three activities generally require one hour, seven hours and one hour, respectively, for a total of nine hours — and hence the name “9h.” To make this possible, a famous designer was requested to make the sleeping capsules more attractive and stylish. Guests are assigned lockers that open with keys and sleepwear. The floors for female and male guests are segregated, as are the elevators to access the floors. To provide female guests with a greater sense of safety, a security camera is configured to detect if a male enters the women-only floor, and notifies the staff. This hotel is convenient located in a commercial and tourist area about five minutes’ walk from Kyoto’s Shijo station. The company that operates 9h is proceeding with plans to open new branches in Tokyo and Osaka. About 70% of guests are foreigners. The hotel has been inspected by many people in Japan and from overseas with an interest in architecture and design. The hotel was named recipient of the Japanese government’s Good Design Award in 2010.

Note: The Good Design Award is Japanese comprehensive design evaluation and commendation system, operated by Japan Industrial Design Promotion Organization (JIDPO). The system has its origins in the “Good Design Selection System” (known as the “G-Mark System”) instituted by the Ministry of International Trade and Industry of Japan in 1957.