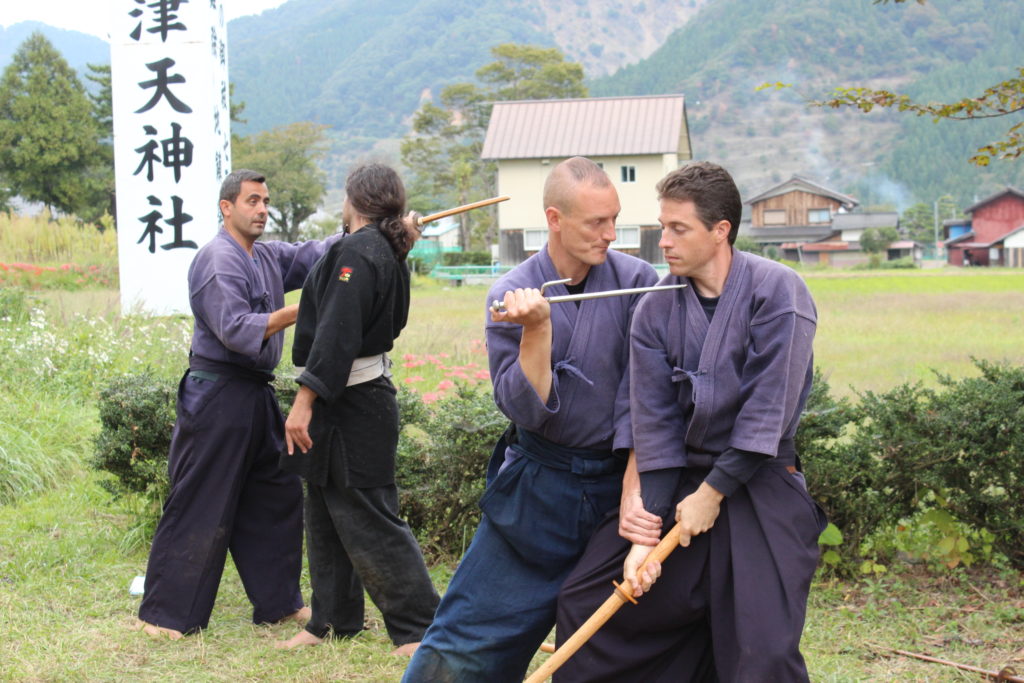 They step aside swiftly to avoid a straight downward sword attack from their enemy and take one step forward to stab a jitte (a short metal truncheon) to his throat. The motion is done in a blink of an eye. Or grabbed by the lapels, they pound their fists strongly to their enemy’s elbow joints and kick his abdomen at the same time.

These life-and-death movements are practiced in a place of scenic beauty with mountains and a large lake. What a contrast! All of the trainees look very serious, but you can’t hear their shout but only their hard breathing from time to time. It seems all secretive like ninja.

Nine-day concentrated training to toil ninja techniques held annually in Takashima-city, Shiga Prefecture in October, 2012, was intended mainly for non-Japanese, all of whom have a dream to become an authentic ninja.

Looking at the brief training schedule, you may find words difficult to understand what they do about. Double breath, kotodama (spirit of words), kongotai (solid posture), koppo-jutsu (bare hands technique), torinawa-jutsu (rope technique), sui-jutsu (swimming technique), hishingyo (climbing, jumping, crossing, etc), ju-jutsu (magic technique), etc. “These are the martial techniques handed down from Koka region (in Shiga Prefecture). They are also the basic skills required as samurai (ancient warrior),” says Jinichi Kawakami. “This martial art is only fraction of ninjutsu.”

According to his definition, ninjutsu is the comprehensive techniques such as espionage or reconnaissance, machinations, surprise or night attack, perturbation and so on to achieve a certain collective purpose. In this thinking above martial techniques are only used mainly when confronting directly against their enemies. In addition, the purpose shouldn’t be personal but collective one like surviving one’s own small village in a warring period for example. If it is a personal aim, it would become a criminal act like theft. And ninja is the ones who maneuver those comprehensive techniques as occupational abilities and work to attain the goal. 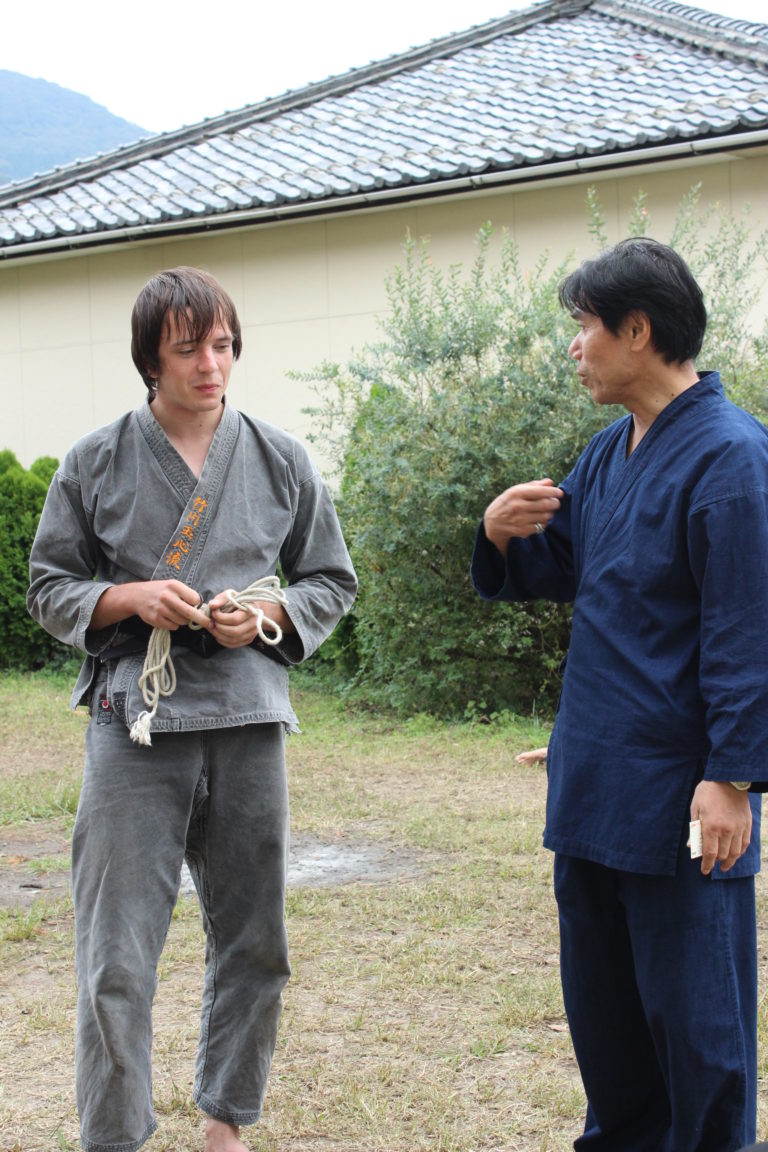 “They do anything to survive. If they think they can’t win, they don’t fight, like, ‘if you can’t beat’em, join’em.’ They have psychological skills. They use fire to distract an attention of their opponents or use medical herbs as a hemostat. Ninjutsu is also an integrated survival techniques composed of various skills and knowledge,” says Kawakami. He thinks there is a misunderstanding about ninja especially outside Japan. Non-Japanese often liken ninja to ancient assassins or spies. But they explain only part of true ninja.

However practicing on how to conduct night attack or how to do espionage without modern technologies is something unrealistic. So this annual training focuses on basic samurai martial arts, called bujutsu which are given lessons during the daytime. Those knowledge base techniques like deceiving or mnemonic techniques, herbal medicine knowledge, etc or some skills unrealistic to learn like guns or using fire are taught in the night time verbally or text base.

“Everyday I get up before 7 am and until 9 I review the training I learned the day before. Between 9 and 12, there is a formal class. There is a lunch break between 12 and 2 pm. From 2 to around 6:30 pm there is an afternoon class. There is an evening break until 8 and the knowledge lecture is given for 2 hours after that.” So explains 35-year-old Marco Palomar from Spain. This is his fifth time to participate in this training camp. He works as a surgeon professionally back in his country. He trained Judo and other martial arts since he was a child, but took an interest in ninja so much and now he trains only ninjutsu. “Ninjutsu has an old history and there are tons of techniques which intrigue me the most,” says Palomar. According to Kawakami, ninjutsu was developed around the warring period between 15th and 16th century. Koka and Iga schools became famous since both of which are close to the ancient capital, Kyoto, so latest methods or expertise could be obtained which would pile up as deepened knowledge and various techniques.

“Not only judo or karate, ninjutsu is getting popular,” replies by Jose Defez, a 40-year-old policeman from Spain, after being asked by the popularity of ninjutsu in his country. He has participated in this training camp since nine years ago. He finds it the most difficult to maneuver a sword especially and says, “This is very difficult but also most interesting.” Even if it’s his ninth time, he learns something new every time and constantly takes a note. “I take a note, so that I can practice myself back in Spain.” The instructor, Yasushi Kiyomoto, says, “We assume a real fight, so repeating a movement again and again until we actually do it without thinking it is necessary.” Practicing everyday is something must be done to acquire a real skill. So every trainee diligently take notes. 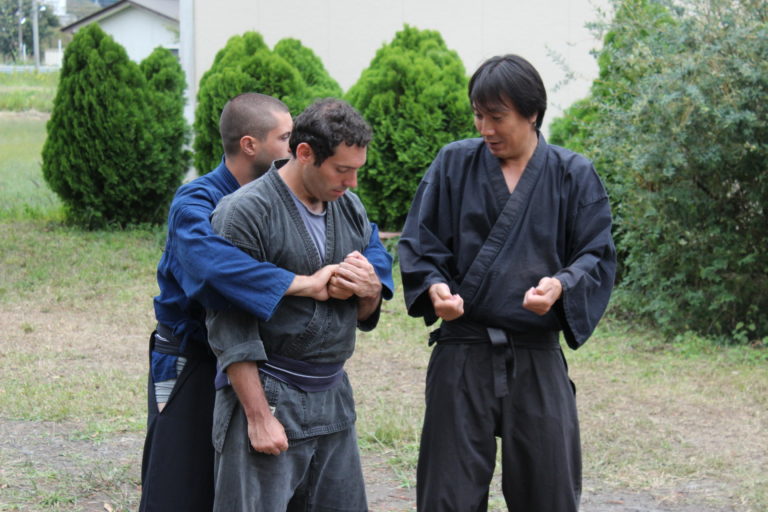 Kiyomoto (left) teaches how to strike back when assaulted from behind. 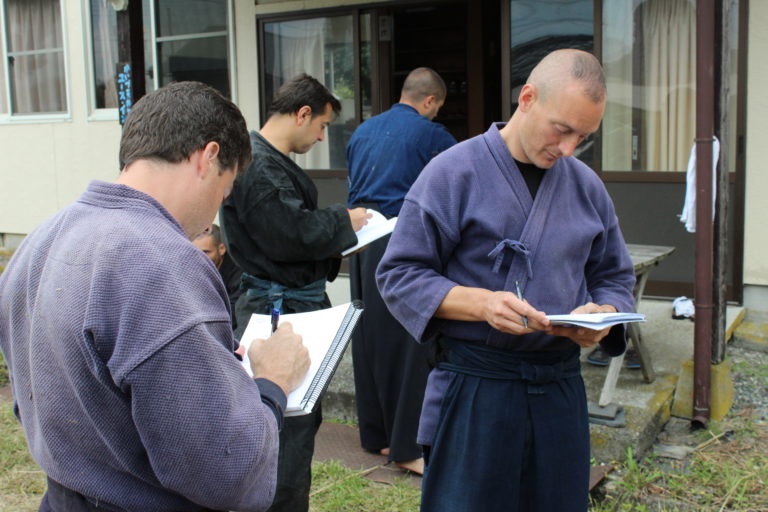 The oldest participant is a 50-year-old Japanese, Hiromasa Tsuyuki. He holds many dan (rank) in various martial arts like jujutsu, bo-jutsu (staff weapon techniques) or iaido (sword techniques). But this is his first try in ninjutsu. “It is on a completely different level and very high-level. It was developed in mountainous district and not one-on-one but you against 10 or more, so the techniques are vital, wild and yet clever,” says Tsuyuki. “Other Japanese martial arts were mostly systematized during the peaceful time of Edo period (1603-1867), so usually you fight one opponent at a time much like a present-day sports. But ninjutsu was developed during the warring period, so the techniques can be applied with no matter how many opponents are.” He finds there is a movement never or rarely conducted in other martial arts. “Falling and attacking simultaneously, doing backward somersault to untangle the opponent attack or killing at one blow techniques are eye-opener. They never give up, either. Because if they give up, it means death.” This real live or die circumstances must have developed a real fighting method. But at the same time, Tsuyuki points out also the training is good for health. “The movements are very natural and reasonable. If you do them properly, there is no burden on your body. Eight days has passed now, and already I feel my bodies light and nimble. I guess that’s because I had to use parts of my body I rarely use on a daily life.”

Kawakami’s current activities are vying in on this same result, saying “After systemizing the whole ninjutsu picture, I discern things which can be learned today and not. Using poisons is not legal and deceiving someone is unethical. But practicing body movement can be applied for health or body protection against a burglar for example. Or having an authentic lesson course for throwing shuriken or running on a rugged terrain can be intriguing for some people and which might be used to revitalize a local region. Anyway, having a whole ninjutsu picture is the first step forward.”

But he laments very few Japanese learn ninjutsu and hopes that they take a new look on it. “Japanese are better at making a poker face. Not sending true feelings, but they can laugh for example. They can sense what the others are thinking and read the atmosphere sensitively. Ninjutsu was born in Japan, so Japanese have an edge to learn it readily.”

The great torii gate at the Itsukushima Shrine

The Itsukushima Shrine, located at 続きを読む…

Last October, restoration of the re 続きを読む…