“Biggest Discovery in Japanese Archeology Since WWⅡ” and “Can’t Wait To See It” were some of the sensational articles that appeared in the morning papers throughout the country on March 27, 1972.  Brilliantly colored wall paintings had been discovered in the Takamatsuzuka Tomb in Asuka village, Nara Prefecture.  This year marks the 40th year since this major discovery.

The discovery was also widely reported overseas at that time, sparking the ancient history and archeology boom that has continued to this day.  It is said that, during the year of the discovery, from 1.7 to 1.8 million people descended upon Asuka village, which had a population of only 10 thousand people, to see the actual wall paintings for themselves.  Even today, most history textbooks and accompanying documents carry color photographs of the wall paintings.  In addition, this ancient tomb which was thought to be built around 700 CE was designated as a special historical landmark in 1973 and the full color wall paintings a national treasure in 1974.

<Significance of the Excavation of the Takamatsuzuka Tomb>

History books had already noted that there was a tomb in this area.  However, its full-scale excavation was not started until the 1970s.  Excavation of the Takamatsuzuka Tomb has two important significances.  One is that the colored wall paintings had been well preserved and still so brilliant as not to be seen anywhere else in Japan.  A group of men and the sacred animals such as Genbu (Black Tortoise) and Seiryu (Azure Dragon) were drawn in detail with an exquisite touch.  In particular, the elegantly dressed women drawn on the east and west walls of the stone chamber attracted people and became popular as the Asuka Bijin (beautiful women of Asuka).  The name came from the Asuka era that lasted for nearly 100 years, during which the capital was located in this area and where the Takamatsuzuka Tomb was built. 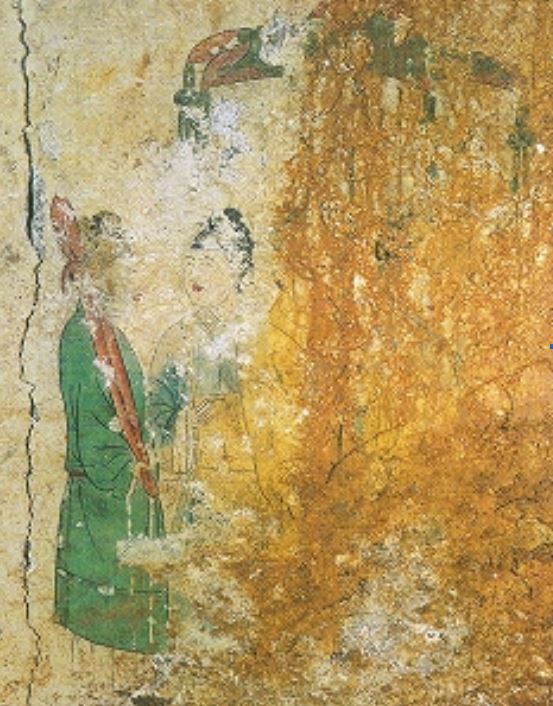 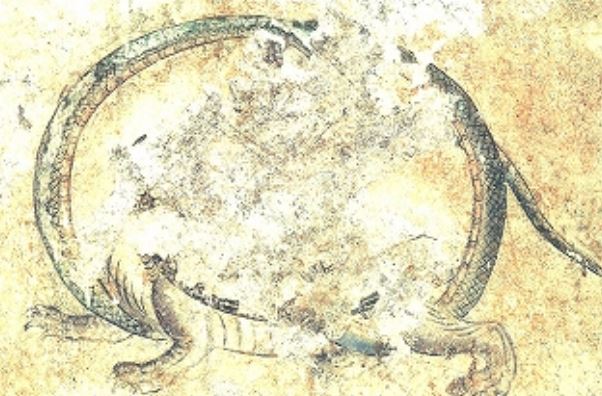 Genbu at time of discovery (reproduction)

The second is that the search begun for the roots of the person buried in this tomb has given rise to a new viewpoint on how Japan was founded in ancient East Asian history, especially in relation with China and the Korean peninsula.  The wall paintings and buried items including mirrors and amber accessories cannot be explained without referring to the influence from the Asian continent.  Who is buried in the tomb is still unknown, but there are several theories.

<Establishment of a Preservation Foundation>

The Asuka Preservation Foundation was established in April 1971, one year before the discovery.  Around 1972 when the wall paintings were discovered, Japan had passed through its period of high economic growth and society had the opportunity and time for investigating the history and culture of Japanese ancestry.  During the Asuka era (593 to 694), the era of Empress Suiko up to Empress Jito , Buddhism and other culture brought from the continent in the 6th century were flourishing and many palaces, shrines, temples, Buddhist statues and tombs were built in the Asuka area.  Nevertheless, because of its ideal location only 40 minutes away by train from the major city of Osaka, the area was subject to various development projects such as housing land development from around 1965.  The situation was that if the development remained untouched, precious national and historical heritage would be lost.

Being worried about this situation, Konosuke Matsushita made an appeal to then Prime Minister Sato which resulted in the cabinet deciding on the Asuka preservation measures in December 1970.  The government and private sector came to combine their efforts to protect Asuka, such as by building a government-managed park.  The above preservation foundation was established with Konosuke Matsushita being appointed as the first chief director.  The foundation has been active ever since, aiming to preserve the historical climate and cultural assets of Asuka, which was once the capital of Japan, as well as to contribute to improving the life of the local people.

The executive director of the foundation Masaharu Maiduru says, “This area is the birthplace of the Japanese spirit.”  The tranquil hilly country with terraced rice fields gives one the feeling of what Japan originally looked like long ago.  In 1980, a law was also made to preserve this historical climate, which is called the Asuka Law.  There are many laws for protecting certain historical buildings or parts of historic districts, but the Asuka Law is the only law that protects an entire village.  According to this law, new buildings must conform to strict regulations.  Because the area has not been developed, “you will discover a historical ruin anywhere simply by digging down 50 centimeters to a meter” (executive director’s words).  As such, excavation surveys are going on even today in this area.

It is probably a common desire of human beings to preserve historical assets that stir our imaginations and give courage to the relevant area.  The archeologist Koichi Mori says, “Archeology is the study of giving courage to an area.”  This could be restated as “archeology gives pride and affection to the area where one lives.”  The world heritage Prehistoric Rock-Art Site of the Côa Valley along the border between Spain and Portugal was once threatened to be submerged under water by a dam.  However, local high school students began a movement that reached the president, which resulted in the rock art being saved.  If the area were submerged by the dam, how would young people be able to have pride and affection in such an area?

The Takamatsuzuka Tomb has been entered in the domestic tentative listing for designation as a world heritage site.  Although there is not as much enthusiasm as at the time of discovery, nearly 800,000 people, from students on school excursions to tourists both domestic and from abroad, visit this area each year.  Masaharu Maiduru advises, “I’d like people to enjoy a walking tour listening to the guide’s explanation and imagining.”  Free volunteer guides in Japanese, English and Korean are available (1,000 yen transportation fee).  Applications can be made at the Asukakyo Tourism Association