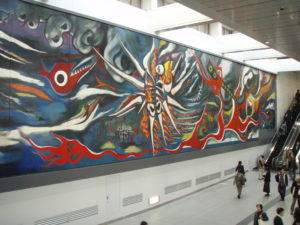 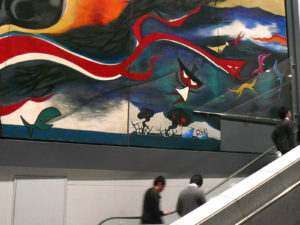 “The Myths of Tomorrow,” created by the late avant-garde artist Taro Okamoto, has gone on permanent display in the Shibuya Station building in Tokyo. Standing 5.5 meters high by 30 meters in length, this huge mural’s theme is based on the instant of detonation of a U.S. thermonuclear test device in 1954. The mural was embellished by a certain group of artists subsequent to the meltdown of the Fukushima Daiichi Nuclear Plant following the March 11 earthquake and tsunami disaster. The group’s image, painted on canvas in the mural’s lower right hand corner, accurately depicted a scene of the damaged nuclear reactors. The company responsible for maintenance promptly removed it, but if Mr. Okamoto were still alive today, I wonder what he would have said.